Wow. It has been a while, hasn’t it? Not to worry. Cliff is still around writing books and being awesome. However, this means that there is little time left for writing here and so he has asked me to help fill in.

Hi, I am Sandy, Cliff’s wife and editor. Nice to meet you!

First and foremost, I want to introduce you to the latest book Battle Engines: Book 1: Sparks. We had a lot of fun working on that one as it is a little different from his usual horror fantasy fare. The best way to describe it is Steampunk meets Mech Warrior. There is war, famine, and giant robots. Who can resist giant robots? 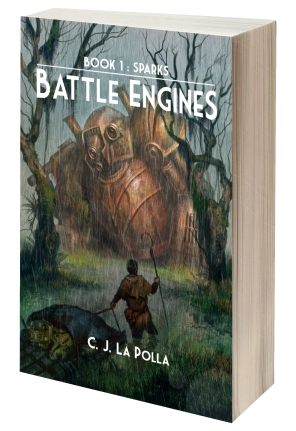 “The cannons of the great battle engines have been silent for a decade, their marches only echoes from long ago. While the battles are long gone, the scars linger. Then unstable peace is shattered by rumblings of war from the far north and soon the massive battle engines will march once again.

Groo, a veteran of that war, has followed the roadways of the valley for a decade helping feed the people with, what he considers, his greatest creation. Soon, his tranquil life will be torn asunder as he is once again pulled into the grips of a conflict that he wishes would just leave him be.”

A little background on the inspiration for this book: Cliff got the idea for Battle Engines while we were on vacation in Tennessee visiting my family. My father is a farmer in his retired life and enjoys going to the rural equivalent of a farmer’s convention called thresherman shows. A thresherman is a person who operates a thresher machine – a machine that separates grains from the plant it came from such as wheat. There is a whole culture around thresherman shows and farming and my father has traveled across the country to see the shows.

Many times they will have new equipment, but most of the time they equipment there are antique. Old farming equipment run by coal burning and steam engines. It was one of these that caught Cliff’s eye and when he came home from the show he told me all about this new story he had in mind.

In Battle Engines, we are put in the equivalent of the Industrial Age but after a war and depression that caused people to suffer. Groo is bent on keeping the people of his world fed in spite of the racism and hatred he experiences every day. Unfortunately, the world is once again on the brink of war and someone else has a better use for Groo.

Stop by Amazon and pick it up! We hope you enjoy it. In the meantime, rest assured that there are more coming. More of Eryn’s Tale will be coming soon-I am waiting for the draft to edit. Stay tuned!